Where to celebrate Hari Raya Kemerdekaan

This Sunday, the 17th of August, marks Indonesian Independence Day — and with it, the country’s 69th birthday. Indonesian communities around Australia will be coming together to celebrate the occasion, and we’ve prepared a list of events where you can take part, too! 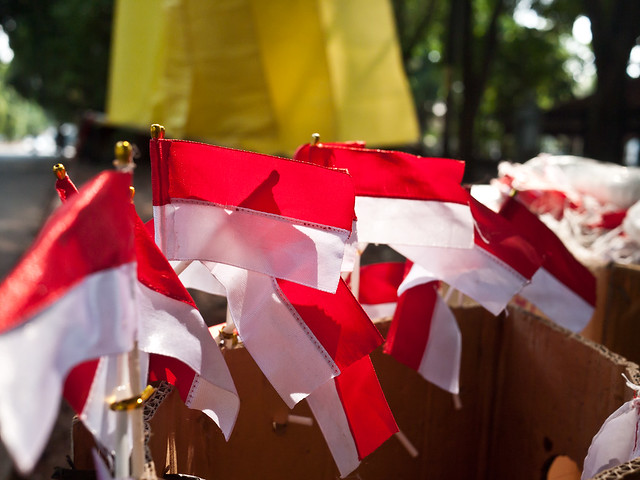 The Indonesian Community Council of New South Wales will host an Independence Day celebration at Leichardt Town Hall, on the corner of Marion and Norton Streets from 11am-4pm. The event will include a live performance from Suara Band, along with food, special presentations and more.

The Consulate General of Indonesia will also host a flag-raising ceremony at the Consul General’s house at 25 Kent Road, Rose Bay, Sydney, from 10am on Sunday, 17 August 2014. (Dress code: Batik or National attire or Formal wear.)

On Saturday, PPIA Victoria will host its first ever theatrical performance, Panggung Merdeka. The theme of this year’s Panggung Merdeka this year is Lensa Kecil Seorang Pejuang (Small Lens of a Fighter), adapted from the life story of student activist Soe Hok Gie. Soe Hok Gie was a student activist opposed to the Sukarno and Suharto regimes, arguing that fair and transparent leadership is of fundamental importance, particularly for the younger generation, and supported Indonesia’s motto of Bhinneka Tunggal Ika.

Live music will be performed from the Indonesian Creative Community of Australia. The event will take place at the Athenaeum Theatre on Collins St, from 12-4pm. Tickets should be booked in advance.

Later on Saturday, PPIA’s Swinburne University and Deakin University chapters will present the first Indonesian stand-up comedy event in Melbourne. The event will feature stand-up comedy by Pandji Pragiwaksono as well as local comedians. The event is taking place at Melbourne City Conference Centre from 7-10pm — tickets can be reserved through Eventbrite.

On Sunday, the Indonesian Consulate-General in Melbourne will an official host a flag raising ceremony at 9.30am, at 72 Queens Road, St Kilda (enter via Queens Lane). The Consulate will host another ceremony and saman performance with Saman Melbourne later in the day at Federation Square, starting from 3.00pm.

PPIA Queensland are organising a special Koempoel Rakyat event on Sunday at Sherwood State School from 10am to 4pm. There will be a traditional food bazaar, music, games and performances.

They’re also hosting a 69km Independence Day bike ride, from Brisbane to the Gold Coast — leaving from Holland Park at 7am. Contact the organisers for more information.

The Perth Indonesian Film Festival will run until Sunday night, with screenings scheduled for Sokola Rimba, Mata Tertutup and Soekarno scheduled for Saturday and Sunday.

A flag raising ceremony will also be held at the Indonesian Consulate-General in Perth, however all places have been filled.

PPIA Curtin University will host an Independence Day barbecue on the 18th of August,

A flag raising and food bazaar will be hosted by PPIA South Australia and the Australia-Indonesia Association on Sunday from 9am, at the Goodwood Community Centre, including angklung, stand-up comedy and saman performances.

The ANU Indonesian Students’ Association are holding a Hunger Games-themed food eating competition on the 23rd of August.

Have we missed an event? Let us know about it in the comments below!